Perhaps in an attempt to find resonance with the current political landscape, Utrecht’s Centraal Museum in The Netherlands recently revisited the problematic paintings of one of the city’s most celebrated artists. De Wereld van Pyke Koch (The World of Pyke Koch) was the first major retrospective held for the Dutch magic realist painter Pieter Frans Christiaan Koch—nicknamed Pyke—in over twenty years. Still recognized for his remarkable talent, Koch’s career has long been overshadowed by his membership to the Dutch Fascist party between the World Wars and his collaboration with the Germans during the Occupation.

Attracting more than 50,000 visitors in over three months, the Koch show was one of the Centraal Museum’s most successful exhibitions in recent memory; its popularity can—at least in part—be attributed to the sudden relevance of populist movements in Europe and elsewhere. As political polarization has metastasized across the world, extremist movements—even in The Netherlands—have threatened to move past the political fringe. The traditionally equanimous Dutch have long prided themselves on their ability to maintain a social environment nurtured by mutual cooperation and coalition-building. They recently resisted a brush with populist far-right figure Geert Wilders in 2017, but thirty-five-year-old Thierry Baudet has since risen from the political vestiges like a superweed inured to hostile soil, boasting a polished, charming persona even more insidious than his predecessor. Baudet relies on an elitist retrograde flair, a more palatable counterpoint to Wilders’ crass bombast. In this last respect the political newcomer resembles the life and paintings of Pyke Koch.

De Wereld van Pyke Koch has revealed the awkward plight of mounting a retrospective for an artist whose legacy has been marred by his “fout” (wrong) politics. Its organizers decided to take the route of treating his troublesome political ideology with painstaking nuance; an understandable, but fraught editorial choice at a time when reading into the subtler points of far-right, extremist politics can seem like a shirking of accountability. There is a heightened expectation that moral absolutes be carved in stone, and confronting noxious populism is often presented as a civic duty. Grey areas as murky as these can be minefields no matter the national context.

The exhibition addressed the most important periods in Koch’s oeuvre through its thematic arrangement. Unfurling the length of his career as it originated in Utrecht, the narrative constantly circled back to the city as the locus for his self-made identity as an aristocrat-painter. His mark on the community was further confirmed in his design for the lampposts, which can still be seen around Utrecht. Their understated, conventional design mirrors Koch’s similar manner of painting – a visitor would be forgiven for having overlooked his invisible artistic signature. Much like the artist’s career after the war, these fixtures do not draw attention to themselves and could easily slip undetected, unless someone is truly looking.

Works by fellow interwar Dutch artists such as Carel Willink and Charley Toorop shared space on the walls with their German contemporaries, but the reasons for these inclusions can only be assumed. Christian Schad’s cold Neue Sachlichkeit portraits and Karl Hubbuch’s vulgar street women compare to Koch’s work on a stylistic- and thematic-level respectively. The violence of Rudolf Schlichter’s Lustmords, however, helped to underscore the qualities that make Koch’s work distinct from the Germans; he may have trafficked in imagery of prostitutes in their autumn years, but he never ventured into the realm of gratuitous sadism.

Koch was not a prolific painter, but even a brief visit to the Centraal Museum can prove to the casual visitor that he was one of Utrecht’s—and more generally The Netherlands’—most formidable talents of the early twentieth century, particularly from a technical perspective. He was known for his masterful, imperceptible brushwork, which demands to be appreciated in person – individual strokes appear as if they have liquified upon contact with his glossy, glass-like surfaces.

The portrait of his wife Heddy (Hedwig) de Geer from 1940 is one of the gems of Centraal Museum’s permanent collection and is an astonishing painting to behold in person. It is a sensuous, stately image of a well-born society woman, befitting this daughter of a former Prime Minister. Heddy stands remarkably erect, like a marble column against a background that is at once stage-like and ambiguous, as if masked by a darkened scrim. Her pale porcelain skin seems to luminate from within, producing a spotlight effect in striking contrast against the enigmatic setting. Koch teases at suggesting a location with the hint of a nondescript Fascist-style building in the background. Elegant white gloves run the length of her arms. Her shoulders remain conspicuously uncovered in relationship to her floor-length gown. This is an image of an aristocratic yet modern woman; a testament to the artist’s combination of source material. Koch’s handling of the fabrics recalls Old Masters such as Jan van Eyck or Johannes Vermeer, but his intuitive sense of lighting and staging owes to his love of cinema. 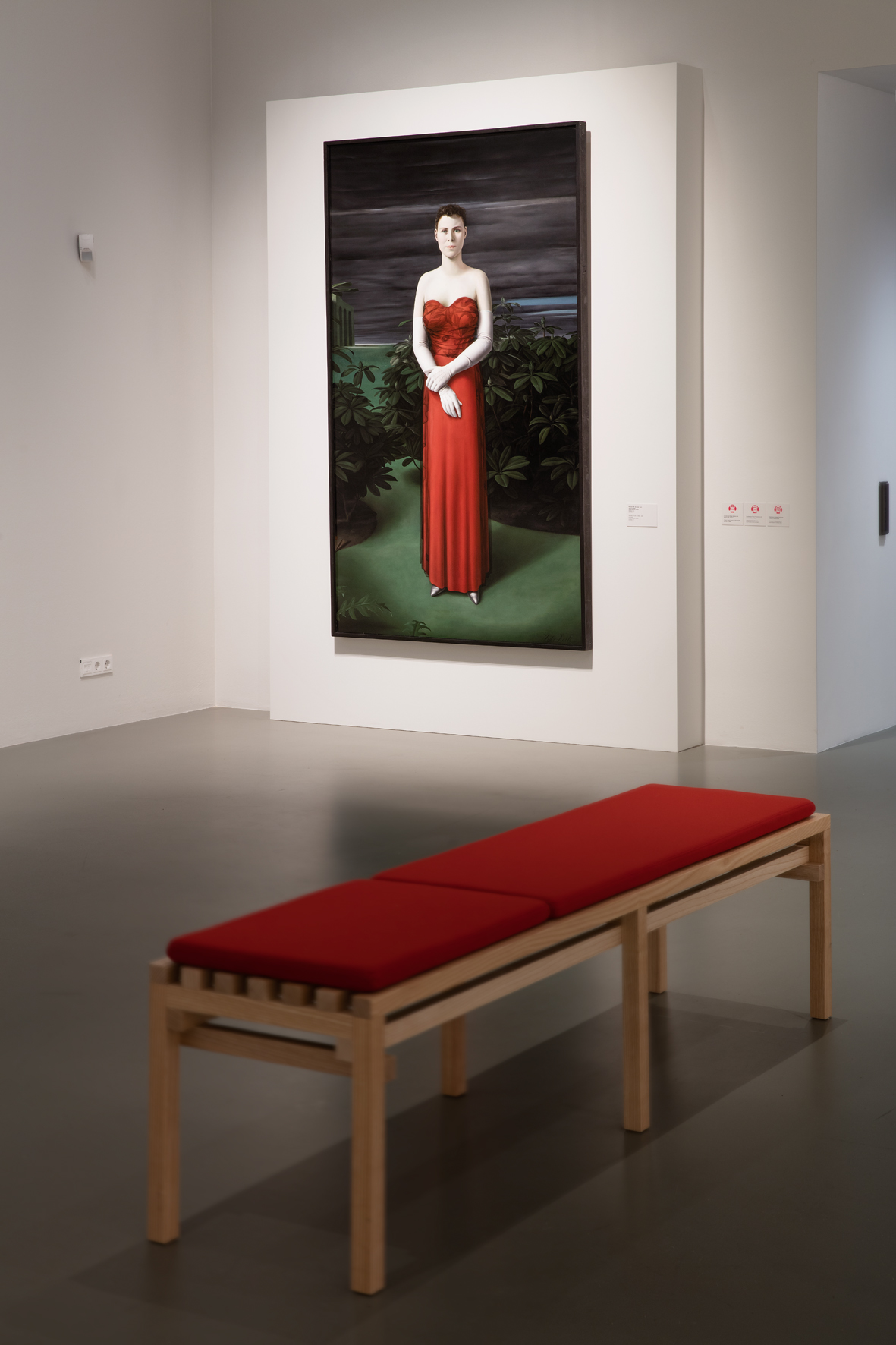 It should be noted that Heddy’s father, Dirk Jan de Geer, who was serving his second stint as Prime Minister in 1940, would be remembered for his rather unpopular decision to back a peace treaty with Germany. To be an informed visitor of this exhibition, however, meant following the circuitous route of the audio-guide, which explained Koch’s revisionist personal history in detail. As the curator explained, at the time of this painting’s first showing of 1940, it was praised as a personification of the New Order. When it came back into his possession after the war, Koch removed a sash and altered Heddy’s hairstyle so as to soften her image. These postwar alterations to the painting have come to embody the ongoing rehabilitation of his career following World War II.

His work was presented as a constant struggle within and against aesthetic conservatism, an implicit corollary to his politics: an idiosyncratic authoritarianism, a credo of absolute, concrete, yet strange truths. Yet, missing from the exhibition was explicit moral condemnation of Koch’s ideological positions in light of seventy years of retrospect, some of which run unequivocally beyond the pale. Rather than the white-washing that was de rigueur in earlier art historical accounts of his life, the sheer number of clarifications used to mildly condemn, but also elucidate, the subtle peculiarities of his political convictions verged uncomfortably close to grey-washing, or worse – moral relativism. It appealed to the viewer to consider his politics in the context of the 1930s, and as a result, downplayed Koch’s choice to associate with organizations whose worldview closely aligned with that of Adolf Hitler.

One particularly uncomfortable issue is the problem of Koch’s anti-Semitism, which the exhibition catalogue describes as selective in its choice of targets. Only counter-examples are cited, such as Albert Einstein and Sigmund Freud, who were exempted from Koch’s contempt due to their status as renowned thinkers in their fields. One of the biographical films on display addressed Koch’s predilection for dictators, but also remarked that he was very particular on this subject. He hoped that an authoritarian would come to power, one with credentials as an intellectual member of the elite. Such distinctions helped to qualify Koch’s beliefs, forming a buffer between the artist and the Dutch National Socialist Party that he viewed as too petty bourgeois to be worthy of his respect. In any case, the contextual fine points were conspicuous in their excess, crossing the fine line separating nuance from apologetics and could be read as (at best) defensive, or (at worst) rationalizing.

This approach does, however, successfully convey the idea that history is never as black and white as the accounts would have us believe. It is true that Koch was never shunned by the artistic community, and even enjoyed the patronage and support of some Jewish collectors after the war. His career serves as a reminder that the clear moral boundaries that have come into high relief with seventy years of hindsight bear little resemblance to the social reality of Europe during the immediate postwar years.

The exhibition’s concluding chapter explored the artist’s later years, when he withdrew into an imaginary landscape of his own invention. As if denying the realities and aesthetics of the postwar experience, he firmly rejected the formlessness and primordial themes that had been embraced by CoBrA and the Abstract Expressionists. Koch remained staunch in his nods to traditionalism, retreating to themes from Greco-Roman mythology such as the nymph Daphne (ca. 1946) and the compositional formats of Quattrocento portraiture, as seen in the painting of his good friend in Profile Portrait of Jonkvrouw J. C. van Boetzelaer (1948). Hanging opposite this wall was a series of paintings related to the circus, which Koch completed in the 1950s. Here, the image of silent-film star Asta Nielsen—whose mask-like face haunted the paintings that he produced in his youth—makes a return as an acrobat in The Large Contortionist (1957). The references embedded in the paintings of the final chapter are sad, beautiful reminders of a bygone past. They are emblematic of the artist’s dream for cultural renewal that would remain unrealized.

Frightening, frozen, exquisite, beautiful: the final room of the exhibition balanced the expressions of escapism and rigidity that characterized Koch’s latest work. Tension was the common thread that tied together the last works of his career, manifest in the bodies in a rugby scrum and the apparatus of a tight-rope walker. Viewing Koch’s work of the late 1940s and 1950s, one is left with a lingering melancholy: his youthful ideals of a societal rebirth, realized in the horrors of the Second World War, are locked in suspended animation. Latent in this exhibition’s account was the idea that if Koch’s legacy was haunted by his sordid political past, then he would have to create his own world.

Stephanie Lebas Huber is a PhD candidate at the City University of New York, Graduate Center, where she is writing her dissertation on the Dutch Neorealists. Her research interests include figurative painting in Europe, intersections between traditional and contemporary media, and the revival of historical techniques and themes as a means to cope with trauma.